Lonzo Ball is an incredibly polarizing prospect as he boasts elite passing, basketball IQ, and PG size at 6’6″.  But he induces skepticism with merely decent athleticism and ball handling ability, and infrequently creates his own shot inside in the arc. There are doubts that a guard with his scoring limitations can merit a top 3 selection in such a strong draft, let alone #1 overall.

The most unique aspect of Ball’s game is that he seeks efficiency and attains it to an unprecedented degree. This manifests in Ball’s 66.8% eFG, which is higher than any drafted NCAA player who averaged 5+ assists per game in the past 25 years (junior Kirk Hinrich comes closest 63.1%).

When the range is narrowed to major conference freshmen who averaged 8+ points and 5+ assists, Lonzo really shines (averages shown are per 40 mins):

All players listed went on to varying degrees of successful NBA careers. This chart suggests that the intersection of shotmaking, passing, and youth is a strong predictor of NBA success.

Ball has more assists and fewer turnovers than anybody in the group while also being the tallest. He stands out as a player likely to have a great NBA career before even considering that he waffle crushes everybody in eFG% and 2P%. His advantage over Baron Davis’s eFG% is similar to the degree that Baron is above average. This alone conveys that Ball is special in a way that has not been seen in any prior prospect.

More Than Just An Assister

Ball isn’t efficient with his own shot selection– he also assisted his teammates to elite efficiency.

This past season UCLA posted the best team eFG% of the past 12 years. That means that they had the #1 offensive eFG% out of the past 4,147 NCAA offenses.

And this is for an offense that was barely above average in 2015-16, ranking #147 out of 351. Ball and TJ Leaf are the only newcomers, and they elevated the team eFG% from 58th percentile to 99.9 percentile.

Ball set up his teammates with elite shots by making lightning fast reads and sharp decisions. He moved the ball quickly, and delivered passes to teammates in their hotspots with pinpoint accuracy. His fingerprints are all over UCLA’s offense, as the team saw massive spikes in 3PA rate, 2P%, 3P%, and much faster average possession length.

Ball’s passing is amazing to the eye test, and every shred of statistical evidence suggests that it is special. He clearly has upside to become the best passer in NBA history.

But He Has No Mid-Range Game!

There is some prevalent notion that Ball only attempted 8 two point jumpers on the season because of an inability to get his funky shot off in traffic. This is hands down the silliest narrative of the 2017 draft. The numbers make it abundantly clear that he refrained because he values efficiency and was consistently able to create a better attempt for his team than the least efficient shot in basketball.

But He Can’t Drive and Finish!

The more reasonable concern is that he infrequently created his own shot at the rim. But to his credit, he did not struggle on a per possession basis. Summing Synergy’s PnR Handler and isolation statistics, here is how he compares to his peers:

He attacked MUCH less frequently than his peers, but he was more efficient than anybody else. And it’s not like he abused the weak teams and then shied away when the defenses tightened up, as he created clutch scores at the rim twice against Oregon— the conference’s top team.

Ball’s handle is analogous to his shot: it is much more effective than it appears it should be. He excels at passing, shooting, and finishing off the dribble to an extent that should be impossible for a player with a severely limited handle. Further, there is no discernible negative impact in his own or team statistics, as his lightning fast instincts prevent his handling limitations from leading to many mistakes.

His infrequent scoring cannot be dismissed entirely, as there is inevitably some mystery in how his unique style will translate to the NBA. But without it manifesting in any discernible struggle as a 19 year old playing a major conference schedule, it is not reasonable to treat it as a major issue. 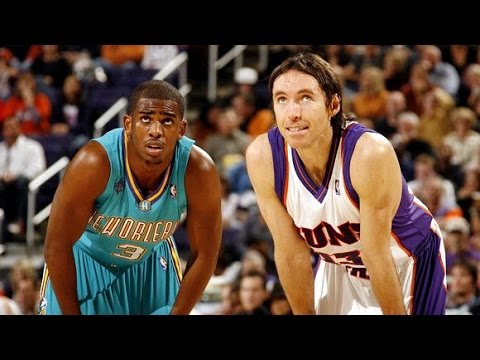 Further mitigating Ball’s lack of volume scoring is the fact that most all-time great PG’s do not relentlessly assault the rim like Russell Westbrook. Magic Johnson, Chris Paul, John Stockton, Jason Kidd, Steph Curry, and Steve Nash are all greats defined by their unique skill, vision, and intelligence rather than ability to get to the rim.

There is a common aversion to comparing Ball to all-time great PGs, and it is not rational.  Imagine the converse scenario where Ball had already completed a hall of fame NBA career, and a young Nash or Stockton was being compared to him. Neither comparison would withstand a moment of rational scrutiny given their vastly inferior physical profiles and NCAA performances.

Even Paul and Kidd would struggle to keep up. I already showed Paul’s inferior NCAA efficiency while being six inches shorter, and he went on to the most efficient NBA career ever of any player shorter than Ball. Kidd’s is two inches shorter, and he suffered a boatload of additional bricks and turnovers to accumulate similar freshman point and assist totals as Ball.

Curry is a different animal from Ball, as his shooting super power gives him upside that nobody fathomed was possible for a player with such frail physical tools. Ball doesn’t have Curry’s super power, but he has a different super power that might yield similarly surprising upside.

All of these players had strengths that Ball lacks, and people will be quick to point these out when a comparison is drawn. But it is impossible to match every strength of an hall of famer, and Ball’s advantages are even more glaring. It is painfully obvious that he belongs with this group, as he has superior prospect profile to all of the aforementioned except for maybe Magic. If he outperforms expectations as much as these players did, there is no cap to his NBA upside.

If Ball does not deserve to be compared to hall of famers, there should be other examples of players similar to Ball who failed. But if we look at young passing PG’s who made shots with competency let alone otherworldly efficiency, flops are hard to find.

Jason Williams and Mark Jackson both passed and made shots and neither was great. But they were both 6’1″ with comfortably inferior NCAA performances to Ball, and both had decent NBA careers. If Ball outshines their NBA careers as much as he outshines their pre-draft profiles, he will be a star.

After that negative comps are scant. Kendall Marshall, Tyler Ennis, Michael Carter-Williams, and Ricky Rubio were all incorrigible bricklayers, posting well below average eFGs. Javaris Crittenton and Drew Barry were both 6’5″ but nowhere near Lonzo’s production level.

It is simply not possible to find any young NCAA player who comes close to matching Lonzo’s strengths while disappointing as a pro. The intersection of passing and shot-making in young NCAA PGs tends to be a reliable predictor of NBA success, and Ball happens to be outlier elite at both.

Weaknesses
Ball Handling
As I have already stated, this is an issue but not a major one. It is difficult to predict exactly how it will affect Ball’s NBA translation, but his intelligence and instincts will likely enable him to overcome this limitation much like he did at UCLA.

Shooting
His funky shooting form is overstated, as Kevin Martin had a similar form and a long career of successful shooting and scoring in the NBA. But Ball was not reputed as a great shooter before his arrival at UCLA, and his 67% FT makes it further unlikely that his 41.2% 3P% is indicative of his true shooting ability.

If he had only made 35% of his 3PA, his eFG% would take a big hit to 61.5%. But he would remain a massive positive outlier relative to other freshman passing PG’s, and he does not require an elite shot to be an elite prospect.

Defense
His physical profile as well as good rebound, steal, and block totals imply that he has pretty good defensive upside. But he also had downside, as his steal rate is not elite and his defense at UCLA was inconsistent. This is an area where he is unlikely to measure up to Kidd, Stockton, and Paul.

Ball has a number of outlier strengths in extremely high leverage categories: intelligence, passing, and efficiency. He has genuine equity to be the GOAT in all three categories, and his physical tools are excellent for a player in this mold.

His shooting, ball handling, and defensive consistency present small but non-trivial weaknesses that create enough uncertainty to preclude him from being a god level prospect. But all of the criticism directed toward him massively overstates the relevance of these weaknesses, while glazing over his super powers that have not been sniffed by any prior prospect.

My only unique and confident take for this draft is that Ball would be the correct selection at #1 overall in most drafts, and this year is no exception. I would be shocked if he is not at least an all-star, and he is likely going to become an all-time great.

15 thoughts on “Lonzo Ball: Point God or No Points Guard?”