One limit of big boards is that a ranked list only orders value, it doesn’t estimate individual values with any specificity. For instance, I have Fultz #2 and Josh Jackson #3, but that does little to describe the disparity between the two, only that I have Fultz better to some unknown extent.

So I am estimating numerical values to each player’s draft rights in terms of millions of dollars. This is my first endeavor and it is strictly intuitive so will be nowhere near perfect, but it is an exercise that conveys my assessments with as much precision as possible. It should be a common practice beyond ranking, because it is far more descriptive of evaluations: 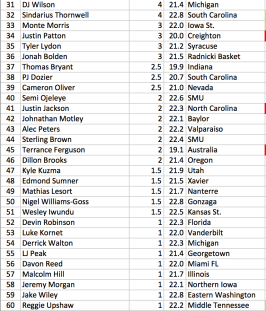 Fultz for #3 and LAL/SAC pick

If Josh Jackson is the choice at #3, there is a clear decline from Fultz. Granted, Fultz is slippery to evaluate as his immense talent is being weighed against his NCAA team’s surprisingly shaky performance. If his team thrived and he had elite intangibles I would rate him closer to $200M, but his bottom line impact was weak enough to add some doubt here. It is possible I am being too pessimistic at $140M, but it seems the Celtics are even more pessimistic and who knows what intangible flags they uncovered in the evaluation process.

I would estimate the Lakers/Kings pick acquired is worth about $40M, so if the deal is JJ + pick for Fultz means the Sixers won this trade by a bit ($140M vs $115M of value). These numbers do not need to be adjusted much for the deal to be even, but it is hard to see this as any clear win for Celtics if they draft Josh Jackson. Fultz is a much better fit since they are already loaded with deep, quality role players and badly need a star. And even if they could eventually be proven right on Jackson they are alone on an island in believing that the two prospects are of similar value.

If #3 is flipped for Jimmy Butler, the deal is arguably slightly better for the Celtics. If we say Butler is underpaid by $25M for each of the next 2 years and his bird rights are worth $35M, that means he is an $85M asset, slightly better than any #3 candidate. I still do not believe it is a good deal for them but it makes a bit more sense than preferring Josh Jackson to Fultz.

If the Celtics draft Lonzo Ball at #3, this deal is a smashing win for them because Ball is better than Fultz and they get a nice asset to boot.

From the Sixers perspective, this is a solidly good deal for them if Lonzo Ball is the Lakers’ choice at #2 overall. If Ball is available this is a big time failure by Colangelo as Ball is the superior prospect and superior fit with Embiid and Simmons. Even ignoring my own assessment of Lonzo (which is likely accurate), if we swap my values for Lonzo and Fultz to mirror consensus it still is not good for Philly.