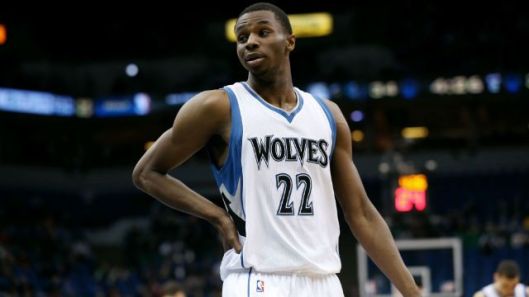 At age 21 Andrew Wiggins still has a long NBA career ahead of him, and a significant amount of time to improve his game. But with two full seasons and ~20% of a third under his belt, we have a substantial sample to assess the early returns on his NBA goodness.

It is fair to avoid extreme conclusion jumping after a player’s rookie season, but most stars show signs of their greatness in their second and third seasons, which will be the focus of this analysis. Let’s start with the rosiest statistical lense for Wiggins: PER. PER is the least predictive catchall statistic, and it overrates players who are precisely in Wiggins’s mold: high volume of shots at mediocre efficiency and little other value. First let’s compare him to the stud defensive wings with whom he was favorably compared pre-draft:

He is dead last in season 3, but that is a smaller sample than year 2 where he was clustered with Paul George and Kawhi Leonard for the top spot. He has plenty of time to rise to the middle of the pack in year 3 with 65 games remaining, and overall this looks not bad for him. But you also see the limitations with PER when a player like Luol Deng is rated similarly to Kawhi Leonard and Paul George, and this isn’t an apples to apples comparison when Wiggins has a higher usage than any of these types. Now let’s compare him to wing stars who actually took shots:

In year two Wiggins was in last place, and in year three he so far trails every player except Rudy Gay. Further, Rudy Gay had a lower usage over the same span (25.3 vs 27.6), which implies less artificial PER padding. This should not be surprising to anyone who read my comparison of Wiggins to Rudy Gay from July 2014.

In year two he was in last place and in year three he trails everybody other than Rudy Gay by a huge margin.  Further, Rudy Gay actually had a lower usage over the span (25.3 vs 27.6), which implies less artificial PER padding.

Overall the most optimistic lense does not look all that promising for Wiggins.

Now let’s look at WS/48 which places greater value on efficiency and team success. There’s no need to cluster scorers any more since WS does not have any biases toward high usage:

Now all of the defense first types other than Metta World Peace have zoomed ahead of him. Other than Metta, Wiggins has Rudy Gay once again keeping him company at the bottom.

The most predictive metric to be found on basketball reference’s stat page is BPM. It highly values the intersection of rebounding and assists, as players who do both tend to be good and players who do neither tend to be bad. Intuitively it makes sense, as anybody who has the intersection of physical ability required to rebound and mental ability and skill level to accrue assists is probably good. Unfortunately Wiggins is bad at both, and this paints him in the most pessimistic light:

Now this ordering makes the most sense. LeBron stands out as the superduperstar that he is, and the defensive stars finally get their due for their impact on that side of the ball. Kawhi Leonard won finals MVP in his third seasons and Paul George led the Pacers within one win of the NBA finals, which are examples of how BPM is much more reflective of the truth than PER.

Even Rudy Gay scoffs at Andrew Wiggins’ BPM. Wiggins does almost *nothing* other than score with limited efficiency, and BPM illuminates the myriad holes in his statistical profile. In his 2nd season he was approximately a replacement player, now early in his 3rd year he has been twice as bad as a replacement player.

Of course this is the most negative perspective from which to view Wiggins– but it is interesting food for thought. Everybody always assumed his downside was a better version of Rudy Gay, but what if he is actually a worse version of Rudy Gay?

The only remaining argument is that Wiggins statistics may undersell his defensive impact, as his athleticism and quickness gives him the ability to prevent easy shots even when he is not racking up blocks and steals. But his defensive real plus minus this year is -2.4 and last year was -1.8, which implies that he is extremely bad on that end. This should not be surprising to anybody who read my pre-draft analysis that Wiggins was not a guaranteed defensive stud.

The upside is that his offensive RPM is slightly positive in both samples, so his overall RPM’s have been -1.2 last year and -2.1 this year. Since his year 2 is the bigger sample, that overall puts him above replacement but clearly below average. I believe this is a reasonable approximation of the truth.

But stats do not tell the whole story!

The best source of hope is DeMar DeRozan, who has a similar physical profile and game to Wiggins. He was slightly weaker in PER, WS/48, and BPM in his first 3 seasons, and while he is a good athlete drafted in the lottery, he does not compare to Wiggins’s #1 overall elite athleticism. Both players thrive off of mid-range scoring and drawing free throws. If Wiggins follows DeRozan’s outlier developmental curve, he should peak as a slightly superior version of DeRozan.

But is it truly a happy outcome if he becomes DeRozan? Toronto had to max DeRozan to keep him around, and many intelligent people would argue that this was an unfavorable contract for him. If Wiggins becomes a better version, he may be worth the max by a hair, but that is also a highly optimistic outcome.

At this stage Andrew Wiggins is clearly not on the path to greatness. He has no chance of becoming a top 10 player, and the optimistic comparison is akin to DeMar DeRozan or something slightly better. This is a dreadful upside scenario for a former #1 overall pick.

It was clearly a massive mistake to draft him #1 overall with a generational talent such as Joel Embiid on the board. While Embiid’s ability to stay healthy long term remains in question, it is clearly a more worthwhile gamble than hoping Wiggins magically becomes good at basketball.

I believe that ranking him #7 on my 2014 final big board has been vindicated as a fair ranking.

The value of a #1 pick lies in the star potential of the player chosen, and thus far Wiggins has shown close to zero star upside. It is time to stop treating Wiggins as a potential star– at this point he is a just a super athlete who has a sliver of NBA upside that will not be franchise changing. Even if he may go on to have a decent career, given his draft hype and #1 overall selection it is not too soon to say that Andrew Wiggins is officially a bust.

85 thoughts on “Andrew Wiggins is a Bust”