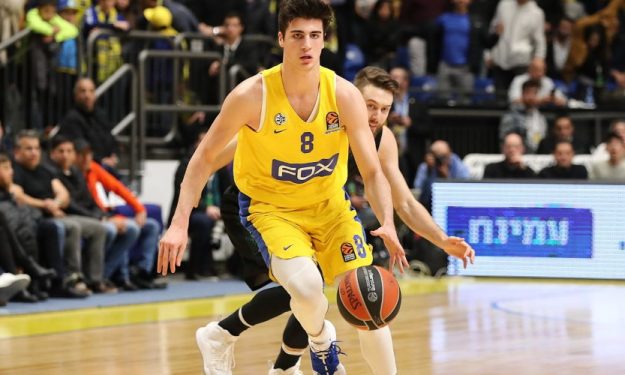 NBA teams have historically had a spotty record drafting Euros, with Darko Milicic being chosen over Carmelo, Bosh, and Wade as one of the most infamously bad choices in NBA draft history.

Conversely, future stars have sliped and provided excellent value such as Dirk Nowitzki at #9 overall, Giannis 15th, Nikola Jokic sliding to round 2, and Luka Doncic curiously being passed up for Ayton, Bagley, and Trae in spite of clearly being a generational talent.

Historically, euros drafted in the lottery have been very hit or miss. But when NBA teams miss, they miss hard:

This could be expanded to include Yi Jianlian, Emmanuel Mudiay, and Dante Exum if we include all internationals. But the benefit of comparing European prospects is that most of them play in Euroleague, which presents us with an apples to apples statistical comparison.

19 year old Israeli Deni Avdija is currently projected to go 5th overall in the NBA draft. Israel offers a low tier of competition, but fortunately he played 26 games and 371 minutes in Euroleague to see how he stacks up to recent successful Euros picked in the high lottery in their final pre-draft season:

Note: Porzingis played in Eurocup which is a 2nd tier version of Euroleague, and Rubio includes ACB stats with only 5 games in EL.

Right off the bat, we can see one of these guys is not like the other. They are all approximately the same age, and all of the guys stuffed the stat sheet, outside of Deni who was a scrappy low usage role player with mediocre efficiency.

This is a huge red flag. PER is far from a perfect stat, but it’s rare for prospects to contribute so little at a young age and nevertheless become stars. Even if we look at his 910 minutes in the much weaker Israel BSL, he only posted 17.1 PER– still weaker than any of the success stories in Euroleague!

Granted, there are a number of reasons to value Deni beyond the box score. He has good wing height at 6’9″, he has decent athleticism, and he has good IQ and work ethic. And in spite of his poor shooting #’s, his shooting form looks good and the percentages may improve over time.

This makes him salvageable as a prospect, as it’s easy to see him becoming a useful NBA role player. But his physical tools aren’t good enough to offer much upside as he has just 6’9.5″ wingspan and below average frame. And there is major risk that he joins the initial list of top 10 picks who busted completely.

Incidentally, they also both played for Maccabi Tel Aviv after FIBA. Bender’s PER was slightly worse in Israel (16.8 vs 17.1) and Euroleague (6.0 vs 10.5) while being 10.5 months younger. Statistically they are in the same tier, and it’s plausible that Deni flops just as hard as Bender.

Deni has a number of advantages that give him potential to be much better than Bender– better athleticism, better passing, and the possibilty of developing into a better shooter. He is likely a better prospect than Bender at the same point as he is in a more useful mold, but the parallels are strong enough to place caution on caring much about his FIBA sample which generated his hype to begin with.

Hezonja played just 86 minutes in Euroleague when he was 2 months younger than Deni, but if we combine his ACB (just slightly softer than Euroleague) he posted 14 PER with similar assists, rebound, steal, and block rates to Deni. He also has similar dimensions at 6’8″ with 6’10” wingspan.

Hezonja scored more volume with better athleticism and much better shooting, and was hands down the better talent at the same age.

Granted, he didn’t progress to the next season posting just a 13.3 PER, and then his shooting didn’t translate to the NBA, and he has overall been a disaster.

Deni should progress better than Hezonja due to his allegedly good work ethic, but he is the inferior raw talent and there is no guarantee that he has a better NBA career.

Casspi is also a native Israeli who played for Maccabi Tel Aviv, and is physically very similar to Deni as he measured 6’9.25″ in both height and wingspan with similar athleticism.

He was 6 months older in his first Euroleague season posting 15.8 PER and then 18.6 PER the following year before getting drafted. Combining the two samples, he was approximately 1 year older on average.

Deni’s key advantage is a much better assist rate per 40 at 3.2 vs 1.5 for Casspi. This indicates that Deni has a high IQ that can help him on both ends. Although Casspi negates some of that edge with a better steal rate with 1.5 vs 1.1 per 40.

Overall these guys feel like similar tier prospects with maybe a small edge to Casspi due to better shooting signal. Casspi was a solid return on #23 overall, but definitely not a player to target in the top 10.

Saric is an inch taller at 6’10” with a similar t-rex wingspan about equal to his height.

He was 9 months older than Deni in his last pre-draft season. He posted 15.8 Eurocup PER with better rebounds, steals, blocks, and usage than Deni, and similar assist rate.

He is a rich man’s version of Deni in about every sense, and still the Timberwolves couldn’t wait to ship him out for the small move up from #11 to #6 overall in a crappy draft to take Jarrett Culver in order to avoid paying him as an RFA.

Deni is likely a better athlete and may have more success switching onto perimeter players than Saric, but that’s his only discernible advantage at this stage.

Diaw was 1.7 years older than Deni in his draft year, and had two seasons of Euroleague where he posted a 13.1 PER then 14.7 in a similar low usage, high assist role to Deni. He struggled shooting similarly making just 29% from 3 and 63% FT over the two years.

Diaw has better length (7′), strength, and lateral quickness, but Deni is more explosive. Overall Diaw’s physical tools seem better, and it shows in his steal and block rates as he posted 1.8 steals and 1.4 blocks per 40 compared to 1.1 steals and 0.6 blocks for Deni.

Diaw had a good career as a role player picked 21st overall. He was overall likely the slightly better prospect given his physical and steals/blocks advantages, but Deni isn’t far behind and it’s plausible he could have a similarly good career.

Diaw seems to be near the pinnacle of optimism for Deni.

Hedo has been tossed around as an upside comp. It’s hard to compare because he doesn’t have any Euroleague stats on record.

Deni is young, and if he works hard *maybe* he can improve both his handle and shooting enough to maximize his passing ability in a point forward role a la Hedo.

But his handle is just so weak at this stage it seems far fetched. Especially since Hedo is an inch taller and Deni doesn’t have any clear physical advantages over him. It feels like a massive longshot, and is a shoddy comparison to justify Deni as a high lottery pick.

What is Deni specifically lacking?

Statistics aren’t everything, but most of the people who overperform statistics tend to have great physical tools. Deni has decent athleticism, but overall his physical tools aren’t that good outside of his height for a wing.

Giannis averaged 8 pts, 2.2 assists. 2.8 turnovers on 36% shooting in his FIBA u20 pale sorely in comparison to Deni’s numbers at the same age.

But Giannis has massive genetic advantages, as he is taller, longer, stronger, and more athletic. Outlier improvements to his game resulted in a huge upside that prospects like Deni don’t remotely share.

The white European prospects who became NBA stars like Luka, Jokic, and Dirk all shared the qualities of exceptional basketball skill to go along with excellent basketball IQ and good height.

Deni has good height and high IQ, but his skill level is a poor right now, which is why his stats are so weak. He can sometimes make 3’s and is an intelligent cutter, but he is sorely limited at creating his own shot and only made 59% of his free throws in 19-20. Those are some massive skill flags for a guy with a pedestrian physical profile.

If you want to roll the dice on a young mystery box wing, Williams is obviously a better bet than Deni seeing that he is 8.5 months younger with better length, frame, athleticism, defensive playmaking, and much better FT% making 83.8% in 74 freshman attempts.

Deni has the better passing and IQ, but that’s not enough to make it defensible to value him over the much better physical specimen in Williams.

Bey is one of the most similar prospects to Deni, as his main selling points are 6’8″ wing height and high IQ play.

Bey is a better handler, shooter, has 1.5″ more length, better frame, and more lateral quickness as he was able to switch onto guards with elite quickness like Devon Dotson.

Deni is 21 months younger and more explosive, but if you want a high IQ 3 + D guy, why not take the guy who has proven more ability in both 3 + D?

Between the two, Bey seems like the better bet to become a Boris Diaw type role player. Neither guy is exciting in terms of upside, but Bey feels safer.

Even in round 2 there are guys like Jordan Nwora and Paul Reed who figure to be NBA role players. Nwora has similar athleticism but better length and frame, much better shooting, but worse passing and IQ and is 2 years, 3 months older.

Reed has much better physical tools, rebounding, and defensive playmaking, but is even more offensively limited than Deni while being 1.5 years older.

Perhaps Deni’s additional youth makes him feel like he has more upside, but without great skill or genetics to build on it’s hard to imagine that he would blow past these two guys in quality with two years more of development. In terms of raw talent, he seems to be in a similar tier to these guys.

On paper, Deni seems to be a 2nd round talent. There are reasons why he may outperform his talent since he works hard, tries on defense, and his shooting may be better than his poor FT% implies. But how far can we reasonably elevate him based on this?

These are the sort of traits that can cause somebody to overachieve, but they are not the type of points that lead to stardom as they are relatively minor compared to the macro view of skill level and physical tools being the strongest predictors of NBA upside.

Especially given the NBA’s poor track record at evaluating internationals, there is no clear reason to give teams the benefit of the doubt in this particular instance.

It seems unrealistic to project his upside to be better than Omri Casspi, Boris Diaw, or Dario Saric types, and there is significant risk that he flops completely like Mario Hezonja or Dragan Bender. Even in a weak draft, it does not seem defensible to choose this player in the top 10.

Diaw went 21st and Casspi went 23rd. Deni seems slightly less talented, but if you want to argue that his intangibles make up for it, then why not rate him in a similar slot to these guys? It seems like a reasonable slot relative to his potential.

Ultimately this is the type of prospect that NBA teams have overrated in the past, and there is no clear reason to believe they are currently rating Deni accurately. He is reasonable in the mid-late first on the possibility he becomes a useful high IQ role player in the coveted 3 + D wing mold, but the raw talent just isn’t there for him to justify the high lottery hype.

2 thoughts on “How Good is Deni Avdija?”