Shai Gilgeous-Alexander is rising on draft boards, as the Kentucky point guard has ascended to #14 in ESPN’s top 100 with his hot recent play. He is currently rated as the #3 PG in the class behind Collin Sexton (#8) and Trae Young (#9).

Shai’s main selling point is that he is a lead guard who can create for himself and others while defending multiple NBA positions, as he is 6’6″ with a 7’0″ wingspan. His primary concerns are average athleticism and limited shooting range, as these arguably prevent him from being more than an intriguing role player. Let’s explore the nuances of his game to determine which side carries more gravity.

Can Shai run an NBA offense?

The most significant anti-Shai point is he is an average athlete posting a mere 23% usage rate. There is no public narrative that he could be an elite point guard, as he is not even in the conversation as best PG in the class with Trae Young and Collin Sexton.

But his recent performance suggests that he may have more lead guard potential than common narratives suggest. After carrying a 22% usage rate for the first 29 games, it has spiked to 27% in the past 7 and the results have been excellent (stats are per 40 minutes):

He is clearly performing at a different level than early in the season. And this is in spite of a slightly tougher average defense over the recent span than the earlier one.

And it’s not just Shai– the entire Kentucky offense has completely transformed with his emergence:

Kentucky  is clearly a different beast from early in the season. They are an incredibly young team that was a dumpster fire for most of the regular season, and this obscured much of Shai’s goodness.

Now that the Wildcats have found their groove with Shai leading the way, they are performing as efficiently as any Calipari offense is capable. This offers a good argument that Shai has the IQ to run an efficient offense, and that his early season performance vastly undersells his upside on this end.

How Will This Performance Translate?

There are inevitably doubts that a non-elite athlete can translate scoring from NCAA to the NBA. But it could translate well, as Shai has an elite euro-step to compensate for his average athleticism. He is incredibly shifty and is deft at stepping his way around defenders to atone for his inability to explode past them.

In this regard he is similar to James Harden who is also an average athlete that has thrived on dimensions, instincts, skill, and outlier coordination. Shai is clearly an inferior prospect to Harden, as he is a clearly much worse shooter and likely has other nuanced disadvantages. But Harden was considered a clearly inferior prospect to the more athletic Blake Griffin, and even Hasheem Thabeet was taken ahead of him due to athleticism concerns.

Dejounte Murray is another average athlete who appears to be a late 1st steal due to good dimensions and shake. I rated Murray as a lottery pick at the time, and perceive Shai as superior.

The tall, long, and shifty lead guard mold is rare, but Murray and Harden show that it is a type that has been wildly underrated in the past. This may be a signal that it is underrated once again with Shai.

Shai is not a lockdown defensive player at this stage, but his potential is clear. His dimensions and solid quickness give him potential to switch onto multiple positions. Also he has shown ability to use his length to make plays on D– here is how his steal, block, and rebound rates stack up vs other Kentucky guard prospects under Calipari:

His rates are nearly identical to John Wall. Although Shai is not nearly as explosive as Wall, his other advantages help compensate. No other Kentucky guard prospect matches Shai’s steals and blocks, and nobody outrebounds him by a significant margin. There is a good argument to be made that he has as much defensive potential as any Kentucky guard prospect in recent memory.

There is no guarantee that Shai will be a positive defensive player, but he has clearly attractive upside on this end. 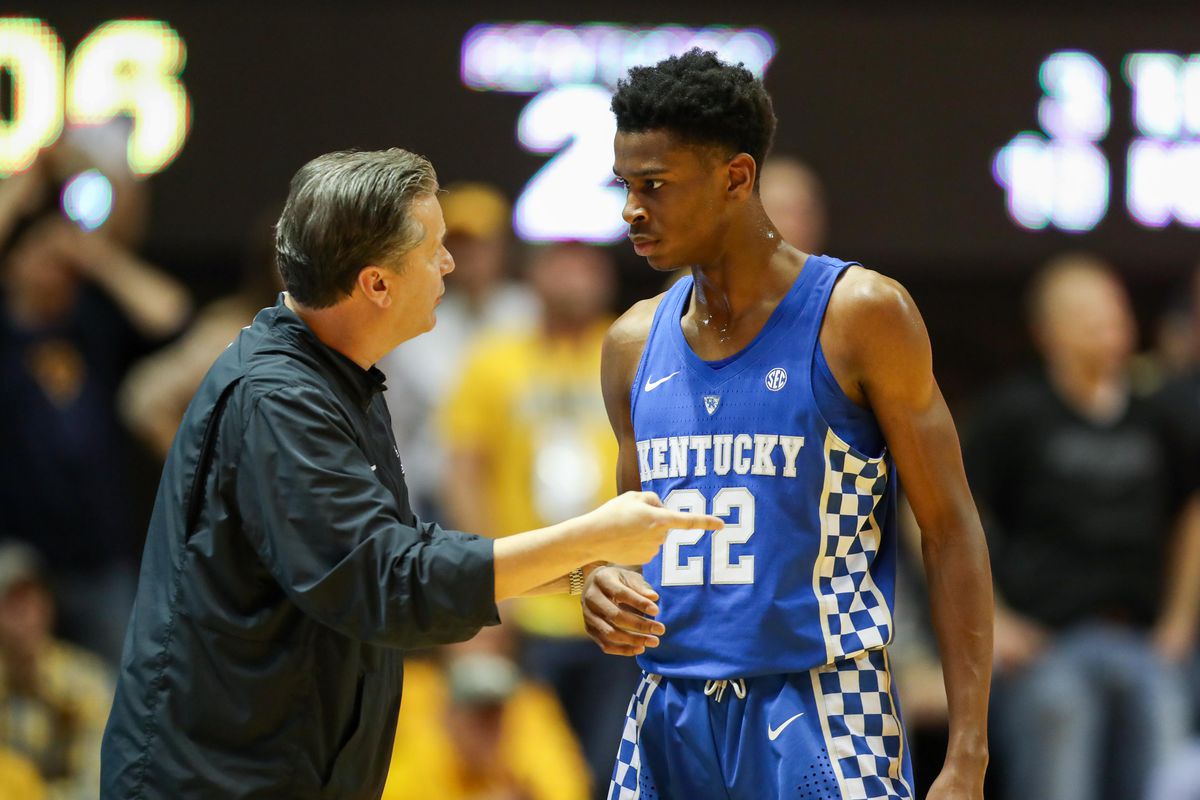 At a glance, it is not obvious that Shai has two way potential. He is not a super athlete, he doesn’t score a boatload of points, he is not considered an elite passer, he is prone to getting beat on defense, and he is not a reliable 3 point shooter. Thus it is understandable why he has yet to garner top 10 attention.

But when he is given a closer look, he is dripping with two way upside. His length and coordination give him slashing potential, Kentucky’s recent offensive performance shows his playmaking potential, his defensive stats and length show his defensive potential, and the only significant concern is his shooting. But even that has hope between his 81.5% FT and 71st percentile off the dribble shooting per synergy.

There are enough questions to rule him out as a possible top 3 selection, but there are enough answers to arguably give him as much upside as anybody once Doncic, Jackson, and Ayton are off the board.

If nothing else he should be in the conversation for best point guard prospect in the class. It would be an unequivocal error to draft Collin Sexton ahead of him. Sexton is more athletic and talented at scoring, but is too small and one dimensional to have as much upside as Shai and has significantly more bust risk.

It’s not as clear who is superior between Shai and Trae Young, as Trae is too weird to assess with high confidence. But almost every guard with Trae’s physical tools outside of Steph has failed, and Shai is about as likely to be Harden as Trae is to be Steph. Shai at least has the success of Dejounte Murray to suggest a solid floor without the best possible NBA translation and development, which is a good reason to give him the edge.

In my eyes Shai has cemented himself as a clear top 10 pick. It will be interesting to see if he can continue his recent level of play into the Sweet 16, but as of now I’d rate him as the #1 PG in the class with a solid case for a top 5 selection.