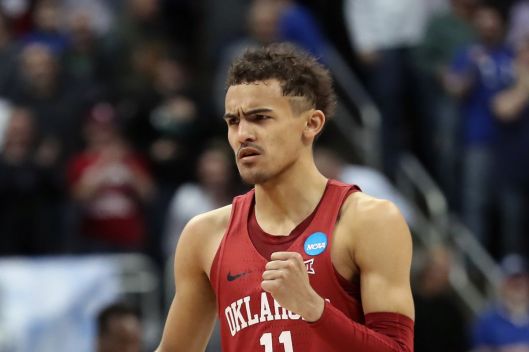 Everybody loves Trae Young, as he is a skill wizard that reminisces of Steph Curry.

But he is not Steph, and I have expressed this sentiment in a data driven analysis of his team’s performance. But since not everybody is into data, let’s key in on qualitative factors that are being overlooked:

1) He is really, really small

Trae measured just 6’1.75″ in shoes with a 6’3″ wingspan at the combine. This is shorter than Steve Nash, Steph Curry, and Chauncey Billups who are all listed at 6’3″.

The vast majority of good players listed at 6’2″ or less have had elite athleticism on their side. Chris Paul, Kemba Walker, Mike Conley, Kyle Lowry, Tony Parker, and Ty Lawson were all described as elite athletes in pre-draft scouting reports at DraftExpress.

Trae may have underrated quickness and speed, but nobody believes it is top shelf. He is in a physical tier where nobody has been elite.

The only player who *maybe* had similar physical limitations and excelled was John Stockton. He is before my time, and I do not have a strong grasp on his athleticism. But for the sake of argument we will say he is physically similar to Trae. Except there is one key difference

John Stockton was a 5 time NBA all-defense selection. If you are 6’1″ without freakish athleticism, you need to make a positive impact in every possible way to sum to elite production. And Trae is downright abysmal on defense, where it is not clear that he even cares to get stops.

Oklahoma’s defense declined from 39th best to 85th best returning almost everybody after adding Trae. He rates as by far the worst defensive guard in the class via Jacob Goldstein’s PIPM metric, and his defense is visibly terrible in this scouting video created by @GuillaumeBInfos.

He is probably going to be the worst defensive player in the NBA as a rookie, and there is not a ton of room for improvement. His physical profile makes his defense risky enough even with good effort, and he has such a low starting point it is hard to see him ever becoming decent on this end.

If Trae is 3 or 4 points worse than Stockton or Curry on D, that puts a ton of pressure on his offense to merely achieve goodness, let alone greatness.

3) Will he perform better in a smaller role with less of an offensive burden?

He played AAU with the Porter bros Michael and Jontay, and did not show clearly better efficiency in a more limited offensive role. He also shot poorly playing for Team USA in FIBA u18 championship in 2016, as well as the Nike Global Challenge in 2015.

There is some possibility that he lacks the basketball IQ to be an efficient scorer in a medium usage role. He appears to be an extremely skilled chucker who was able to succeed early in his Oklahoma career when he was hot against soft defenses.

Maybe he can learn to be more efficient over time, but based on current information there is limited reason for optimism.

4) Trae fell off a cliff vs better defenses

Most of statistical goodness came against soft defenses. When he faced good defenses his production fell off a cliff. Compare Trae’s per 40 stats vs. top 60 defenses to Steph Curry’s 5 career NCAA tournament games:

People commonly lament the attention Trae drew from defenses, but Steph got the same attention vs much tougher defenses in the tournament and he shined.

These splits were a signal that Steph had some cerebral advantage to translate his goodness to higher levels while Trae did the opposite. It would be a good idea to stop making this comp forever.

Trae has excellent vision, and Chris Stone made a reasonable case that he made a positive effect on his teammates. But the vast majority on his effect came on Brady Manek– a 3* recruit who was much better than expected and happened to specialize in offense. Once you give most of the credit for Manek’s performance to Manek, Trae’s effect on his teammates is only slightly positive.

When you factor in his high turnover rate, and his inability to punish defenses for the insane attention he saw, it’s hard to argue that Trae is an elite passing prospect.

Trae’s passing was good this year, and he could eventually blossom into great. But there is no clear signal that he is a historically elite passer (as I argued for Lonzo Ball last year).

If Trae merely becomes an 85th percentile passing point guard in the NBA, he will likely stick in the league. But it will not be enough to be great in spite of his disadvantages. He needs to be a crazy outlier in this regard, and the early signals say that he is probably not.

6) Is He Actually An Elite Shooter?

Trae has never shot above 36% from 3 at any level. Just in case you needed another reason to know why it is a bad idea to compare him to a player who makes 44% of his NBA 3’s at a high volume.

Part of this is due to awful shot selection and poor size, and he has some non-zero chance of becoming the 2nd best shooter in NBA history. But he has a long way to go, and his shooting may always be undermined by his inability to get clean looks.

It’s amazing how commonly people excuse Trae’s flaws by explaining how bad his teammates were and how many triple teams he saw.

These type of excuses should be reserved for an elite talent like DeAndre Ayton who is so physically gifted that he has significant margin of error for his NBA success.

Trae Young is in a physical tier where almost nobody succeeds in the NBA and he needs to be essentially *perfect* to be great. Yet he has the following flaws:

His skill and vision is rare enough such that he can nevertheless find an NBA niche. But does he actually sound like a player that is an intelligent gamble in the high lottery?

I don’t see a path to him sniffing Steph Curry’s level of goodness. Maybe he can become a low end all-star like the Dallas version of Steve Nash, but he needs a ton to go right for that to happen. If he falls short of Nash, he is going to be a difficult fit into a good starting lineup. He can be a bench microwave, but as lead guard his team will have limited playoff upside.

The realistic upside comp for him is Isaiah Thomas. IT drew some MVP chatter for his box score stats in Boston, but ultimately did not help the offense drastically more than he hurt the defense, translated poorly to the playoffs, and the Celtics became a better team after parting ways with him. That is not a player worth targeting in the lottery– Thomas slid to last pick in the draft for good reason.

In reality, Trae will likely be worse than Thomas. As special as his vision and skill are, he has even more qualities that are especially bad to drag them down.

He has such a weird and polarized profile, it is difficult to say exactly where he should rate. He has some non-trivial value. But there is currently too much wishful thinking that he may be Steph, and I would bet that anybody who drafts him in the top 10 will be disappointed with the result.