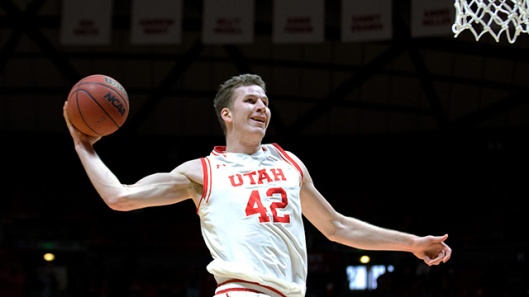 After Brandon Ingram and Ben Simmons go off the board, there are a myriad of possible choices at #3 overall. Dragan Bender is the good choice, and if the Celtics correctly select him, the 4th overall pick is a mess of players who should never be chosen in the top 5 of any draft. Kris Dunn is the only choice that is reasonable to both draft nerds and scouts, which is good argument for him being the best choice. ESPN and DX offer Jaylen Brown, Jamal Murray, Marquese Chriss, and Buddy Hield as alternate possibilities. Draft nerds (such as myself) may argue that Wade Baldwin or Chinanu Onuaku deserve consideration. I would like to make an argument for a player which neither crowd considers to belong in the top 5.

Jakob Poeltl is a 20 year old center from Austria. He is 7’1″ and mobile, he scores efficiently with elite rim touch, passes well, and rebounds decently. He does not attempt jump shots, but he did improve his FT% from 44% as a freshman to 69% as a sophomore.

He fails to arouse excitement in the lottery because he is not an explosive leaper, he does not make jumpers, and there are questions about his defense. His lack of bulk and toughness makes him prone to bullying, and he was most recently seen getting dominated by Domantas Sabonis in an NCAA tournament blowout loss. Further, his lackluster steal and block numbers prevent the statistically aware crowd from embracing him as a two way center. In world where big men are losing utility, it is natural to feel meh toward one who can neither shoot nor defend.

A Defense Of Poeltl’s Defense

He measured 7’1″ with a 7’2.75″ wingspan 239 pounds. This is similar to Willie Cauley-Stein who is 7’0.5″ with 7’3″ wing 242 pounds. Poeltl lacks the athleticism and quicks of Cauley-Stein, but he is not a slouch in these areas. WCS has elite tools and is an elite defensive prospect, and comparatively it is fair to say that Poeltl has good enough tools to be a good defensive prospect.

I do not read heavily into the Sabonis matchup because he can physically match up and it was just one game. There’s no reason to believe that Poeltl will be routinely dominated by Sabonis types. In the 2015 tournament against Jahlil Okafor DX says “Poeltl won the head-to-head battle in almost every aspect of the game.” And Okafor is theoretically Poeltl’s kryptonite since getting he was draft 3rd overall largely for his ability to bully weaker players in the post. The Gonzaga loss was likely just a bad game for Poeltl at the wrong time, especially since I had loads of moneys on the Utes.

The Okafor example proves that Poeltl can handle bullies no more than Sabonis proves that he is a sieve. But proneness to bullying is not the most debilitating weakness as post-up attempts are rapidly vanishing from the NBA. It is a blip in his profile, but not a death knell.

His low steal rate is another blip, and then his block rate suspiciously dropped from 8.6% as a freshman to 5.0% as a sophomore. There are two possible explanations for this :

#1 is true to at least some extent and adds another blip, but let’s explore #2 for a moment

Jumping at every shot in the paint to try to swat it into the 4th row is not optimal defense. It leaves the attempting blocker susceptible to pump fakes and fouls, and even when shots are blocked they are rebounded by the defense at a lower rate than normal. It is often preferrable to contest without blocking, which Poeltl seems to prefer.

Utah finished #131 of 351 in defensive block rate, but #32 in defensive 2P%. In Pac-12 play they were #9 in Blk%, #2 in 2P%. Utah also had the lowest defensive FT rate in the entire NCAA, with Poeltl’s impressively low 4.5 fouls per 100 possessions playing a factor. He is the anti-Skal Labissiere who posted double the block rate and committed 11.2 fouls per 100 in the process.

This aligns with DraftExpress’s scouting report which praises Poeltl’s fundamentals for his discipline, competitiveness, and ability to switch pick and rolls.

One concern may be that Utah’s defense slipped from #6 to #69 following the departure of Delon Wright and 7’0″ backup Dallin Bachynski. Of course any defense will miss Delon Wright, but much of the decline is attributable to variance. Utah’s defensive 3P% slipped from 31.2% to 37.1% and opponent FT% increased a few points as well. This has nothing to do with Poeltl, a little to do with Wright, and a lot to do with variance. If opponents missed shots against Utah like they did the prior year, the Utes could have easily had another top 25 defense. This is not amazing, but is solidly good for a roster that does not feature much size or athleticism outside of Poeltl.

This does not mean that his block rate should be entirely ignored. Even his freshman block rate was slightly less than most stud defensive big prospects post. But his freshman rate did not raise flags, and his low sophomore rate correlates with positive aspects of his defensive profile

His profile is founded on good intersection of macro indicators with a few blips that cut into his upside and create a downside tail. He may be good defensively, or he may be soft and mediocre. But nobody is as worried about the defense of Deyonta Davis who also had issues with steal rate, is 2.5 inches shorter, and has no indicator that he should be better outside of a being slightly more athletic. Poeltl should be treated similarly, as a good but not great defensive prospect.

But centers are a dying breed!

As the game drifts beyond the arc, centers are being used less frequently in favor of small lineups with superior shooting. This dents the value of bigs, especially ones that cannot make threes such as Poeltl. But this will not necessarily trend until centers are extinct– it is generally helpful to be extremely tall at the game of basketball, and it is possible the league will take measures to counteract the 3 point bombing fest that the game has become (i.e. move the 3 point arc back).

Further, while Poeltl is not a 3 point shooter, he does offer the other key small person traits of passing and ability to switch onto smaller matchups. I doubt that a mobile 7’1″ player with multiple skills will become totally obsolete, so it is not reasonable to condemn him based on recent anti-big trends.

Scouts like Poeltl, stat models like him, and he is much better defensively than his stat sheet suggests. The intersection of these qualities tends to suggest that a prospect is good.

Poeltl has an awesome offensive package of rim touch, passing, hands, and improved FT%. He may never be able to make 3’s, but his FT% implies a fair chance of developing a mid-range game and he could be solidly good on both ends. He could also be soft on defense and limited offensively, or he could be a player who is productive but can only be played situationally as the NBA evolves. But everybody outside of the top 3 has serious bust risk and non-elite upside.

His NCAA statistics in many ways parallel to fellow Ute and former #1 overall pick Andrew Bogut, who also had a curiously low NCAA block rate and provided a rare case of a higher NBA block rate from age 25 onward. He also has shades of Al Horford and Marc Gasol who are above average at a wide range of things to sum to a solidly good player. Those are optimistic outcomes that require him to develop a jump shot and hit his upper bound defensively, but they are nice upside scenarios for a weak #4 slot.

I am not certain that he belongs at #4 overall. Kris Dunn and Wade Baldwin may be safer choices in a world where two way perimeter players who can guard multiple positions trade at a premium. But beyond them there are not many names who offer notably fewer flags or higher upside, so I have Poeltl locked into the #4-7 range in my big board.