Most of these guys are going to amount for nothing, but just for fun I am going to take a stab at some deep sleepers who were not invited to the combine that nobody is talking about. I excluded Gary Clark who is widely considered a snub, and am focusing on players who are actively underrated in my estimation. 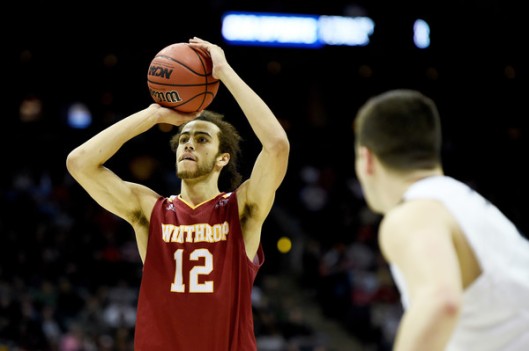 Cooks is the ultimate unicorn of under the radar players. I doubt there was ever an undrafted player who can handle, pass, rebound, and protect the rim like he can. He is not super athletic, but he has a nice first step and is highly cerebral, which enables him to stuff the stat sheet at his height.

This includes two first round picks, an all-time round 2 steal, and Cooks. And he runs the pick and roll far more often than any of them with quite a few more blocks. This is arguably a product of playing against low major competition, but there are no other low or mid major players in his stratosphere. He is an incredibly rare prospect.

Cooks’ biggest flaw is efficiency. He posted a weak 103 ORtg as a senior against low major competition, which is a major flag. But his passing was good enough to help balance the scales. Here are his senior synergy efficiency percentiles as a scorer vs. scoring + passes:

His splits plus passes are likely bolstered by luck to some extent, but it is easy to see how he may offer enough value to overcome his efficiency woes. Also worth noting that Winthrop had a monstrous split with him on the court vs. off.

His other issue is that he may not be able to shoot. His career 68% FT 35% 3P inspires hope, but he has an ugly tornado form that reminisces of Joakim Noah.

Cooks has incredibly outlier strengths for a player that will likely go undrafted. His shooting and efficiency woes will be his undoing as a pro fairly often, but he is absolutely worth a summer league flier and 2 way contract. I would even take him in the 2nd round. 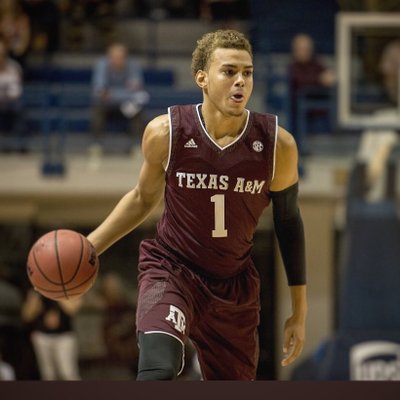 Hogg is a not great athlete with relatively short arms (6’10.5″ wingspan) who averaged a modest 11 points and 5 rebounds per game as a junior, so it is easy to write him off at a glance. But there are reasons for optimism:

At 6’9″ he is a big wing, which is quickly becoming the prototypical PF mold. He has good vision and is a good shooter, and enough athleticism to average nearly a block per game. This is an excellent baseline for a 3 + D prospect.

The problem is that his overall scoring and rebounding leaves much to be desired, but there are a number of factors stifling his production:

His creation is nevertheless a flag for even a 3 + D role player, as he rarely even attacked closeouts. But for a player with such a good baseline of role player abilities, there could be a nice payoff if he translates well to a more favorable environment. 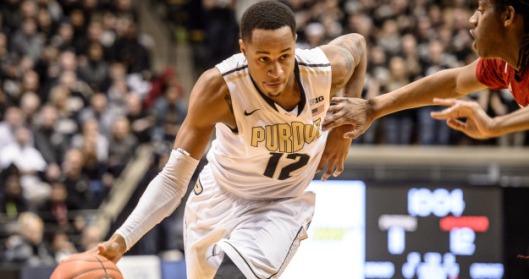 All Edwards did in 4 years at Purdue was win win win no matter what. He was an instant contributor from his freshman year, and the Boilermakers were a mainstay at the top of the Big Ten standings during his tenure.

He is 6’8″ and can rebound, pass, and is a great shooter with 39% 3P and 82% FT over his career. He also can handle a bit, which puts him in a mold that has an incredibly easy path to success as a pro.

His main question is whether he has the quickness and athleticism to defend at the NBA level. Given his size, IQ, and skill level it is worth gambling that he can in the 2nd round.

Rodriguez had an interesting career arc at Seton Hall. As a freshman he was a pest on defense and a beast on the glass, but too raw to contribute much offensively. Over time he added polish to his skill level, and his steals and rebounds declined as his offensive role grew.

His shot is a bit of a question mark, but at 37% 3P and 74% FT as a senior he has improved enough to have potential. And his 6’10” wingspan and strong frame gives him potential to switch onto bigger players.

Desi’s ability to provide secondary creation ties everything together. It is a common misperception that 3 + D players only need to make 3’s and play defense. Low usage NCAA players have a terrible NBA track record for a reason. Competent shot creation is a necessity for even low usage NBA role players, as players who cannot punish the defense on easy scoring opportunities are major offensive liabilities.

In the NBA he will likely mirror his freshman role where he can focus on defense and rebounding, while his performance as a junior and senior proves that he has the offensive competence to succeed in a low usage NBA role. If he can combine the best of both worlds and develop into a reliable shooter, he should be a useful NBA role player. 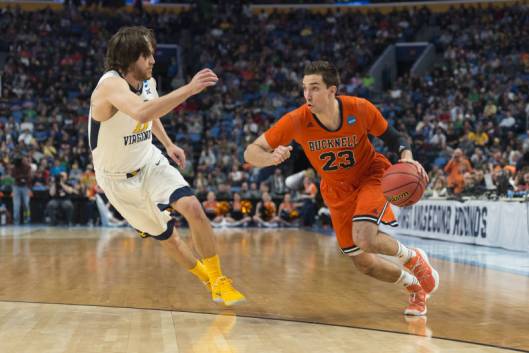 Thomas offers passing, rebounding, and shooting with ideal wing size and good feel for the game. He has a shot distribution that would make James Harden blush, as he attempts an inordinate amount of threes and free throws. And he has a solid frame and athleticism to give him a chance of translating to higher levels.

An encouraging point is that he scored an efficient 27 points in 29 minutes against Michigan State in the tournament before fouling out. 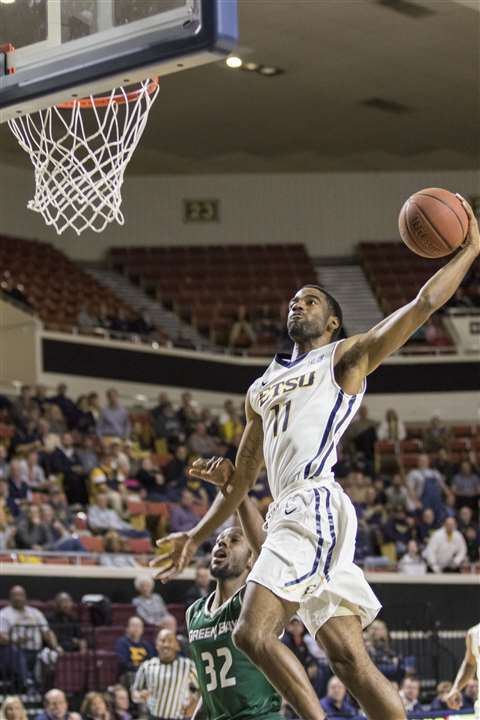 Bradford has a Tyler Johnson-ish profile, as he did it all for a very good ETSU team as a junior and senior. He is a bit undersized for a SG at 6’4″, but he makes up for it with excellent athleticism.

He does not quite match Johnson’s elite NCAA efficiency, but is nevertheless a solid flier. There are not many better UDFA gambles than an athletic mid-major star. 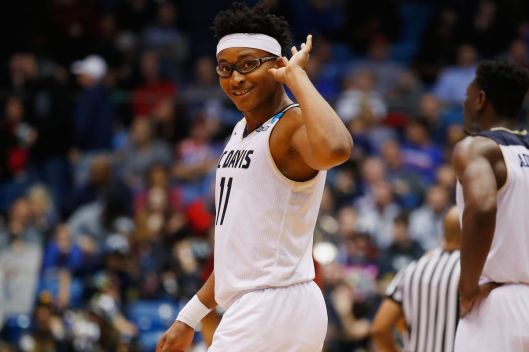 At a glance Moneke does not seem like a prospect, as he is an undersized chucking PF who posted a 1:3 assist:TOV ratio in 2 years at UC Davis and is now 22 years old.

But he is very athletic, excellent on the glass, has good steal and block rates, and UC Davis defense was great with him on the floor and significantly declined with him off both years.

Moneke has a workable shot– he made 67% FT and 9/23 3P in his 2 years at Davis. He has also been able to score in his two games against elite major conferences defenses– posting 24 points on 10/15 shooting vs Ivab Rabb’s Cal team and 20 points on 8/13 vs Kansas in the tournament.

Moneke needs to develop an NBA 3, become a more willing passer, and successfully convert to the perimeter.  This is a bit of a longshot parlay, but the baseline talent is there and how can you not love that headband + goggles combo? 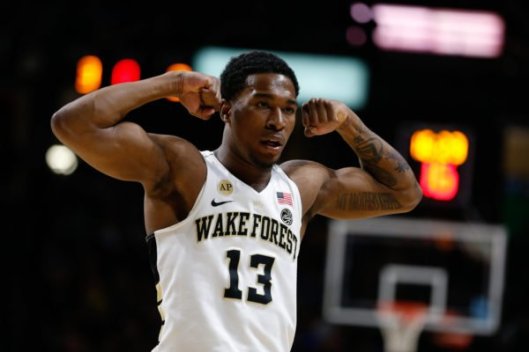 Crawford has solid PG tools, as he measured 6’3.5″ with a 6’6″ wingspan in 2014 and has solid strength and athleticism. He has good vision, can create off the dribble, and his 83% FT as sophomore and 87% as a junior conveys excellent shooting potential.

His only weakness is that he doesn’t have a major strength. All of his tools are decent but not great, and the same can be said for his basketball IQ and skill level. But if he develops well, he has an easy path to NBA rotation guard. 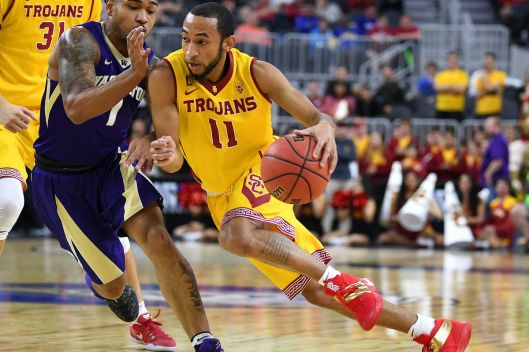 Small point guards are weird. Often times the most highly touted ones fail to translate to the pros, but occasionally a stud role player like Fred VanVleet goes undrafted.

After Jevon Carter (who was invited to the combine), McLaughlin is the best shot at a FVV level UDFA steal in this crop. He is a good shooter with elite floor vision, and an uncanny ability to be a pest on defense (77th best steal rate in NCAA) without fouling (6th lowest foul rate).

He overall had a less impressive career than FVV, but McLaughlin’s senior year breakout offers enough intrigue for the speedy PG to be a nice undrafted flier. 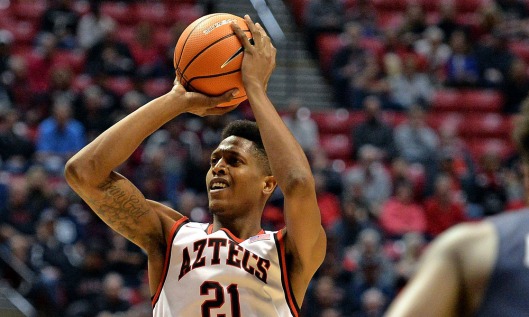 Chad Ford stanned so ridiculously hard for Pope as a possible top 10 pick that it became a running joke, especially without him ever putting it all together over his 4 year career.

But even if Ford’s optimism was highly unwarranted, there were non-trivial reasons to like him. There are not many 6’10” athletes with even possibly enough skill to play the wing, and Pope is still only 21 on draft night.

He never developed well enough to be truly exciting, but it is worth seeing if an NBA coach can find a way to get more out of Pope than he showed as San Diego State.