I have already written about my three favorite sleepers in round 2, but that’s just scratching the surface. Round 2 is littered with all sorts of interesting prospects this year. This draft may have the smallest disparity between prospects slated to go round 2 vs its underwhelming lottery picks that I have ever seen. Let’s look at a few more possible sleepers who may carve out solid NBA careers, once again sorted by current ESPN ranking: 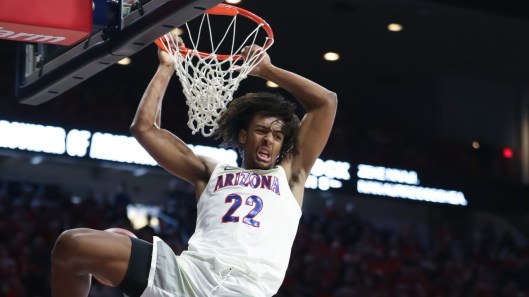 Nnaji is a somewhat boring big prospect, as he provides good interior scoring and rebounding, but has ordinary steal, block, assist rates to go with a pedestrian 7’1″ wingspan and decent but not great athleticism.

What makes him interesting is that his flaws run parallel to fellow Arizona alum Lauri Markkanen. Lauri had even worse steal, block, assist rates, and wingspan, but he made up for it with good lateral mobility. For productive big men, ability to potentially defend in space can help atone for lack of defensive playmaking abilities.

Obviously Nnaji doesn’t have Lauri’s elite shooting ability for a big man, and isn’t the same tier of prospect. But he does offer some shooting potential, making 76% FT and 5/17 from 3 as a freshman.

He also does traditional big man things like interior scoring and rebounding better than Lauri. He is smooth and coordinated which makes him a reliable interior finisher in spite of lacking high end explosiveness.

Even though he is boring on his surface, he has a number of strengths that accumulate and no glaring weakness. There are questions about his defense and shooting, but that’s true for most prospects. He has good intangibles, and if he is successfully develops his 3 + D, he is going to be a solid player. 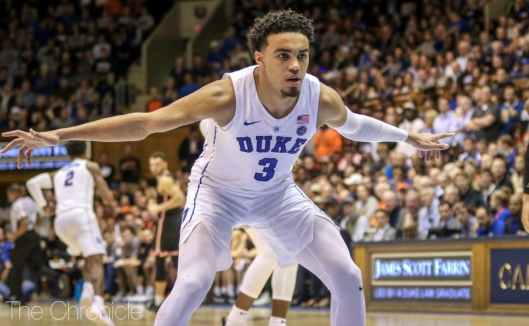 Jones is also a boring mold of game managing PG who plays smart and avoid mistakes, similar to his brother Tyus.

It’s not clear if he is better or worse than Tyus. Odds are he is approximately the same. He doesn’t have the creation or defensive potential to have a big upside tail, but he does have good odds of being an efficient high end backup to low end starting PG like his brother.

It’s understandable why a player like that would slide to round 2, but it feels like he is sliding a bit too far for a prospect likely to be a useful role player. 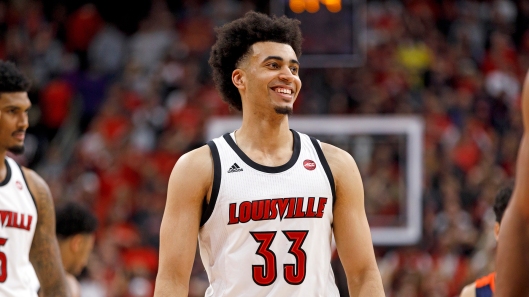 Much like Aaron Nesmith, Nwora offers good shooting and an NBA body, and that’s about it.

But Nwora is slightly bigger, at 6’7.5″ he is an important 1.5″ taller and his 6’10.5″ wingspan is half an inch longer. He also seems slightly more athletic, and his physical edge shows in his superior rebounding.

Nesmith is also 13 months younger so he gets the clear edge in shooting.

Otherwise both guys have similar steal, block, assist, and free throw rates. They really are similar prospects, and it largely comes down to Nwora’s slight physical advantages vs Nesmith’s slight shooting advantage. How do we choose between the two?

One argument would be that Nwora can easily become the better NBA shooter, but the difference between 6’6″ and 6’7.5″ is significant and Nesmith can never make up that gap. Even though Nwora’s percentages are slightly worse, he appears to have the quicker release on his shot which makes it harder to buy into Nesmith’s advantage for a skill that is extremely high variance to begin with.

The flipside is that Nesmith is lauded for his work ethic and leadership, so teams deciding between the two may favor his intangibles. But Nwora is the son of the Nigerian national team coach and seems to have good intangibles as well, so it’s not a clear advantage for Nesmith based on the limited information available.

Ultimately they are very close and it’s not clear who is the better prospect. The short answer is that they belong in the same tier, which is the sign that the massive gap between their current #44 and #10 rankings should be closed significantly.

Perry brings a fascinating offensive skill set to the table for a 6’10” player, as he does a bit of everything. He can handle, pass, and shoot, as well as do traditional big man things like score inside and he is an excellent rebounder.

Granted, his skills are still in development. He showed big offensive improvements as a sophomore, but was still turnover prone with 3.0 assists vs 3.7 turnovers per 40. And he shot a solid 76.8% FT, 32.4% from 3, but had a low 3PA rate and still needs to improve his range. But he only turned 20 in March, and has a nice baseline for skill for a young big to build on.

Defensively, Perry faces questions similar to Vernon Carey. He has a 7’0.5″ wingspan, and while he is a decent athlete, his lateral mobility and ability to defend in space are in question. He is currently slotted in round 2 because there’s some chance he gets roasted on defense in the NBA.

But he also has a chance of defensive competence. If he can learn to hold his own on that end and develops his offensive skills well, that will accumulate to a good player.

Perry is yet another 2nd round big who isn’t that different from Obi Toppin. He lacks Toppin’s explosive finishing ability, but is much more well rounded offensively, better rebounding, and has slightly better dimensions and hope of competence on defense.

Even though both are technically sophomores, Perry is two full years younger and likely has more upside to develop into a complete player.

Ultimately it’s confusing how Toppin’s flaws get overlooked while Perry gets jammed in the back end of round 2. Is explosive finishing that rare of a skill compared to motor, physicality, and perimeter skill? It typically isn’t valued that high, and even though it’s a significant advantage, Perry chips away with a number of smaller advantages that add up.

It’s plausible that Obi is nevertheless the better prospect. But it isn’t consistent to ignore his flaws while stashing Reggie Perry and Vernon Carey in the round 2 dumpster in spite of their flaws not being any worse. 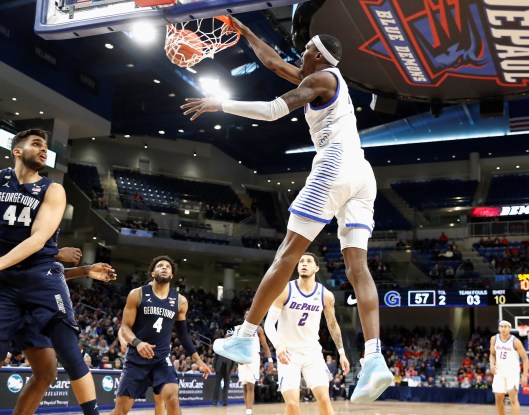 Reed is a limited offensive player who has spent his NCAA career mired on a horribly coached DePaul team. He is likely going to be a low usage role player in the NBA, so his lack of NBA hype is understandable.

That said– there is much to like about him. In spite of his offensive limitations, he still has a passable shot, making 73.9% FT and 33% 3P over his DePaul career. He has a low 1.9 3PA per 40 minutes, so his shot still needs improvement but it’s not broken.

Other than that he is capable of finishing and has an OK enough 2.0 assists vs 2.9 TOVs per 40 such that he won’t be a significant impediment to an NBA offense if his shooting comes around.

He isn’t perfect on D, as he is mistake prone on this end, and it remains to be seen how well he can guard NBA perimeter players. But his length, athleticism, and steal rates all suggest that he had a great chance of success, especially once he is freed from the shackles of Dave Leitao’s coaching.

He appears to be a role player in the mold of guys like James Johnson, Moe Harkless, and Andre Roberson. All of those guys were solid returns on first round picks, so why is Reed mired deep in round 2?

My best guess is because he slid through the recruiting radar as a 3* prospect being young for his class and limited on offense, and spent his NCAA career on a perennially bad team. The interesting in draft comparison is Precious Achiuwa, who is currently slated to go #9.

Unlike Reed, Achiuwa was a 5* recruit because he was very old for his class and showed more handling and scoring ability than Reed. But now that they are both in school, even though Achiuwa is a freshman and Reed is a junior, he is only 3 months younger. They have very similar physical profiles with nearly identical dimensions, and their statistical distributions are similar as well:

Most advantages point toward Reed. His assist:TOV suggests he is more likely to be able to play the perimeter in the NBA without being a disaster. His FT% and 3PA rate more optimism for his shooting. And his superior steals and blocks suggest more defensive upside.

On the flipside, Precious has a significant free throw rate advantage and is a bit tankier and more physical. He also does have a better handle which gives him slightly more offensive upside in the instance that he improves his myriad flaws on that end. And his significant RSCI edge may not be 100% attributable to scouts being tricked by age. After all, Reed had a breakout junior year and it’s easier to take Precious #’s at face value.

Like Nwora and Nesmith, the two likely belong in the same tier and are very close considering their disparity in current hype and stock. Reed is more likely to be useful because he is currently a better team player, but Achiuwa has a bit more home run potential. 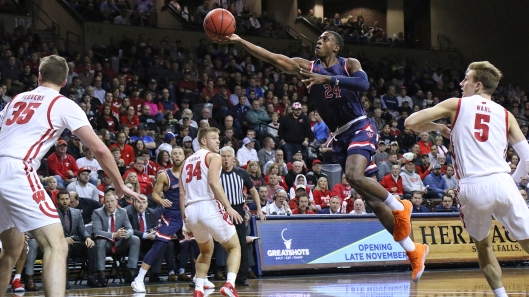 Fitts projects to be undrafted because he turned 23 in July and he’s merely a good but not great player. He started his career as a 3* recruit for South Florida, and after an underwhelming freshman year he transferred to Saint Mary’s where he played well for two seasons.

On one hand, he is an unheralded recruit who never performed well in NCAA until he was 21. But he does a number of things well that should translate to the NBA as a 3 + D wing.

He is 6’8″ with 6’11.5″ wingspan, a good body and athleticism, and he rebounds fairly well. He also has the mobility to defend the perimeter and a solid steal rate, which suggests good potential for versatile NBA defense.

He also is a good shooter, making 40.7% from 3 and 78.6% FT in his two years at Saint Mary’s. And he can handle, and is capable of getting to the rim and finishing.

It’s not that he just slightly checks the boxes, he clearly is a competent handler and shooter and has physical tools to defend multiple positions in the NBA. Those are the 3 most important qualities for a role playing wing, and Fitts brings them all to the table.

Even we compared him in these 3 areas to top 5 prospect Deni Avdija, Fitts is clearly better in all 3. Deni is 3.5 years younger and could surpass Fitts handling and shooting longterm, but Fitts current advantages are so significant he should be considered the favorite to be more skilled longterm. And Fitts physical tools will always be a notch better than Deni.

But of course this doesn’t make him necessarily a better overall prospect than Deni. Deni is known for his basketball IQ, and in spite of his youth is already a much better passer than Fitts who is prone to tunnel vision and has an ugly 2.1 assists vs 3.3 turnovers per 40 for Saint Mary’s. He is also not a lockdown defensive player in spite of his tools, as he is mistake prone and struggles to defend the pick and roll.

This significant IQ/vision advantage for Deni makes him the overall better prospect, but Fitts’ edges in skill and tools makes it much closer than an UDFA should be to a top 5 prospect.

For an undrafted player, Fitts’ flaws aren’t backbreaking. IQ and vision are slippery to assess– interestingly he had a better assist rate as a freshman for South Florida when the rest of his game was much weaker. Perhaps his vision is fine, and NBA coaching is able to mitigate his mistakes in which case he should be a solid role playing wing.

Fitts’ age inhibits his upside, he’s not going to be a slam dunk steal of the draft. But his upside doesn’t seem all that much lower than the younger and similarly flawed players that are currently getting lottery hype.